Officers and Directors Chosen for 2022 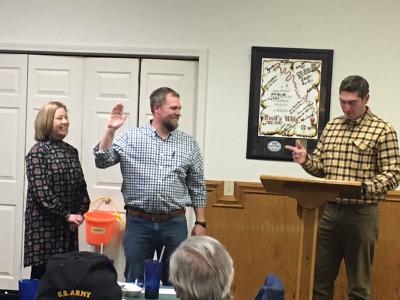 In his final act as the out-going president, Hayes named both the 2020 Associate and Builder-of-the-year. Johnny Huffman was recognized as Associate-of-the-Year for his year's long membership involvement, board service, and golf tournament organization, among other accomplishments. Chris Bullin, of East Bend, was tagged as Builder-of-the-Year for his long-term work ethic and standards, and excellent reputation. As Yadkin County's chief building codes inspector, Hayes said he'd never gotten a complaint about Bullin and his work.

Starting out his tenure, Bryan Huffman announced the 2021 Associate and Builder-of-the-Year. Anthony Sebastian, now in the corporate office of G & B Energy, is Associate-of-the-Year for similar commitments over the years to the HBA, the board, and many community service projects while general manager at the G & B base in Millers Creek. Likewise, Nick Adams (Nick Adams Construction) is the '21 Builder-of the-Year for his industry standards expertise, along with his involvement in the community and church.

The dinner was also highlighted with the attendance of David Pressly, a former National HBA president, the music of Wes Tuttle, Billy Gee, and Randy Gambill, and the give-away of many gifts, presents, and gift cards provided by member companies. Much appreciation to all! 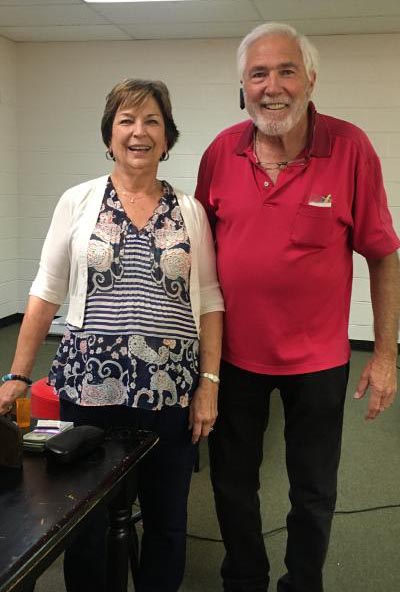 Faw was determined to see the venture through. “You have to stay in it…to win it” she said, referring to strategies she’d seen play out on television. Mrs. Faw then donated a portion of her winnings back to the HBA. The Association promotes the interests of the home-building industry at the local, state, and national level. It also supports the Joe Faw Scholarship Fund, SkillsUSA program at Wilkes Community College, Wilkes County Schools’ Nichols for Kids program, and similar efforts in Wilkes and Yadkin County.

The event was held Thursday, June 24th, at the Wilkesboro Civic Center – long-delayed from March 2020 by COVID-related restrictions. The HBA thanks all ticket buyers and sellers. Ken Canter sold the winning ticket.

A West Wilkes High School student has been selected to receive a $500 grant from the Joe Faw Scholarship Fund. Senior student Roman Perez-Brasil is the son of Roman Perez and Graciana Brasil of Millers Creek.

A second $500 scholarship grant is awarded to Ariel Lagunas…a second-year Associates degree student enrolled in the Building Construction Technology program at WCC. College instructor Shane Allen called Ariel “responsible, eager to learn, very out-going, and the first one up the ladder” in discussing the selection with the committee.

Faw was a 1968 charter HBA member keenly interested in promoting the building industry through education. The Association also supports the very active SkillsUSA program at WCC. An additional $500 donation is going to the local SkillsUSA team, which has consistently excelled in regional, state, and national competitions.

At the most-recent membership event of the Wilkes-Yadkin Home Builders Association, board member Shanna Bell presented a "Points to Ponder" outline related to Medicare -- something all of us have faced, are facing, or will face all too soon. Among several notions, we learned too there are many avenues to consider/explore, depending on your situation. There's also a lot of 'mis-information' out there, particularly on the internet, but also among our own friends/family.

And Team Advisor Hardin Kennedy is looking for judges for upcoming, local SkillsUSA competitions. Call/contact him through Wilkes Community College. 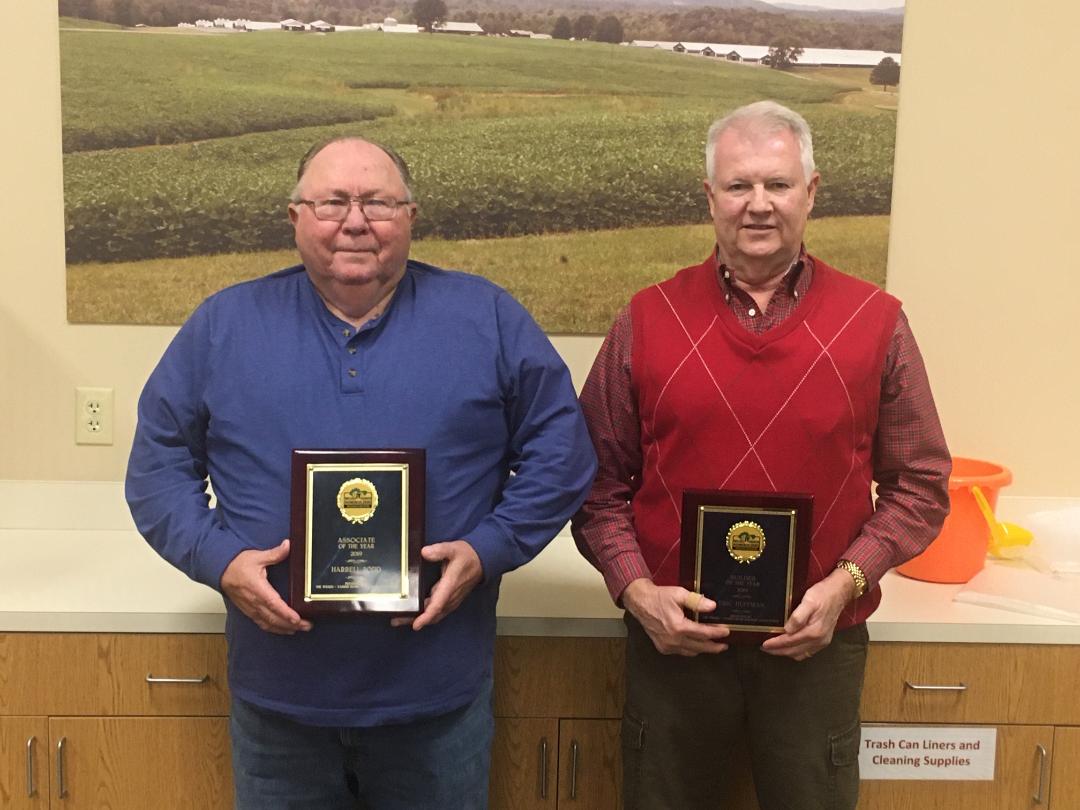 (Wilkesboro) -- Long time Yadkinville resident Harrell Todd has been named Associate of the Year by the Wilkes - Yadkin Home Builders Association. "I've known Harrell for many, many years", said newly reinstalled HBA president Gary Hayes. "His integrity and how he conducts business has never wavered". Todd Brothers Plumbing Company was opened in 1978. Todd currently serves on the Association's Board of Directors.

Also, Eric Huffman, of Huffman Bros. Construction, was tabbed as "Builder of the Year". Anthony Sebastian, of G & B Energy commented on the selection. "Eric's award also comes from what he's accomplished. In addition to his Church and community involvement, Eric was the chief drive behind the recently-completed Operation FINALLY Home project", a custom-built, mortgage-free, ADA-compliant home for local wounded veteran Chance Cleary.

Operation FINALLY HOME is dedicated to providing custom-built homes for America's military heroes who have sacrificed so much in defense of our freedoms and values. We thank the Wilkes Yadkin Home Builders Association, Lowe's and the Wilkesboro community who have contributed to honoring U.S. Army SPC Chance Cleary with a mortgage-free, custom-built home! Please feel free to stop by Lowe's and join our celebration.

A North Wilkes High School student has been selected to receive a $500 grant from the Joe Faw Scholarship Fund. The award is presented annually by the Wilkes – Yadkin Home Builders Association.

Senior student Jackson Teague is the son of Scott and Tonya Teague of North Wilkesboro.

"It's customary", said HBA President Gary Hayes, "to offer the Joe Faw Scholarship grants after conducting interviews and hearing recommendations, and taking other information into account, including financial need, attitude, and career intentions.

Faw was a 1968 charter HBA member keenly interested in promoting the building industry through education. It also supports the very active SkillsUSA program at WCC. An additional $500 donation is going to the local SkillsUSA team, which has consistently excelled in regional, state, and national competitions. The association’s website is wilkesyadkinhba.com.

The Home Builders Association continues its close ties with Operation Finally Home. It is awaiting a certificate-of-occupancy for a new custom-built home that will be mortgage-free and ADA-compliant (Americans with Disability Act) for a local Army veteran wounded in Afghanistan.

No one can remember a time when one person/company had 2 raffle tickets remaining with only 4 chances left in the drum. But that's one of the realities from the Wilkes-Yadkin Home Builders Association annual drawdown Thursday at Wilkesboro Civic Center. Dale Younger/A & J Rental survived 196 pulls from the tumbler...2 of the last 4 numbers belonged to A & J Rental...but still agreed to split the $8,000.00 total cash prize. On top of that, A & J Rental donated $500 of its $4,000.00 share to the current HBA 'house-build' project for Wilkes County veteran Chance Cleary. "There's no need to be greedy", said Younger, noting that one of the other surviving numbers belonged to the Brushy Mountain Ruritan Club, itself a local non-profit community service organization. The 4th remaining number was purchased at auction for $650.00 among a trio of legendary locals -- Glen Andrews, Cecil Wood, and Jerry Cowan.

Cleary, 25, was on hand for the event...and led the group in the Pledge of Allegiance at the start of the festivities. Larry Thompson won $100 for being the first ticket disqualified at the start. Young Chance Mastin proudly took home $200, Dwight Phillips Jr. raked in $300, and Bill Lyons was awarded $400 in pulls at pre-selected intervals.

A tremendous round of applause to A & J Rental, Brushy Mountain Smokehouse, Auctioneer Randall Woodruff of Great State Auction Company, Wes and Ann Tuttle, Sharron Huffman...and special thanks to anyone and everyone who bought one (or more) tickets and who sold one (or more) tickets. 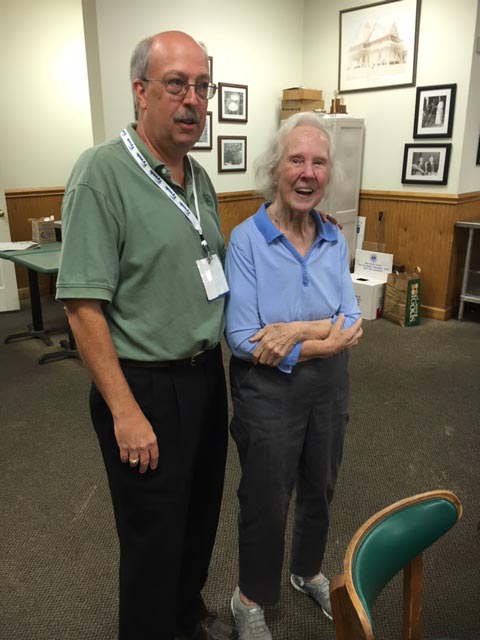 While the Association was eager and happy Thursday evening to host our annual "Legislative Night", or "Candidate's Night" as it's sometimes called; the unexpected, absolute highlight of the event was catching strong, long-time member, Pauline McLean out getting a dish of ice cream at the Brushy Mountain Smokehouse. Pauline retired a couple of years or so ago from Lowe's Home Improvement...with the distinction of having worked for the company longer than anyone else...some 45 years.

Pauline is a past "Associate" member-of-the-Year...also a two-time Presidential Elite contributor to the North Carolina Home Builders Association's (NCHBA) Build-Pac Fund...establishing a reserve balance we're still working from today. Indeed, we collected $90 this night to apply toward our 2016 goal. (Special thanks always to Jerry Cowan - Builders Mutual Insurance Corp -BMIC)

As to the candidates: We got to hear from both ladies wanting to become the next Wilkes Register of Deeds. Democrat Connie Cox and Republican Misty Smithey courted the HBA with their plans to implement a process of getting important documents available 'on-line'...like 96 or more of the other counties in North Carolina have accomplished years ago.

Incumbent Republican county commissioner Keith Elmore reviewed recent accomplishments, including a two-cent drop in the property tax rate. Vera Smith Reynolds, from Mount Airy, reported her extensive 32-year career in education, and the hardships of being married to a Vietnam era veteran that suffered with post traumatic stress disorder (ptsd). She's running as a Democrat in the 90th House District, which includes 3 precincts in eastern Wilkes County.

And rounding out the discussions...competitors for the State Senate's 30th District are Democrat Michael Holleman and Republican incumbent Shirley Randleman. Michael said he hopes to bring "sensible representation" to Raleigh, while Shirley hopes to increase collaboration among our neighboring and regional counties, and improve rural education.

In other matters, the proposed 2017 slate of HBA officers and directors was approved. Eric Huffman (Huffman Bros. Const.) becomes president of the HBA upon installation in December. Highlights of the new board include the addition of Mark Lawrence, with Yadtel...and Gary Hayes, the Yadkin County Building Inspector, who lives in Wilkes. Ken Canter (Canter Construction) will conclude consecutive terms as local president.

"Associates" night, or "TableTop" is tentatively set for Thursday, October 20th. Details, including the location, to be announced soon. 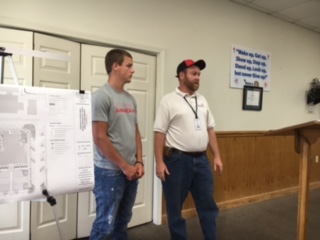 The Tyson Foods processing plant in Wilkesboro runs through some 4-5 million gallons of water each day...about 8 gallons per processed bird. It's easily the most cost-effective and most-efficiently run of any of Tyson's plants in the country. Then there's water to be supplied to residents of the Town of Wilkesboro, several outlying Water Associations, and, at times, even the Town of North Wilkesboro, should the Reddies River go through severe drought conditions. Ken Noland, Wilkesboro's 17-year veteran town manager, reports long-running efforts at creating a consistent, long-term plan at keeping high-quality water from the Kerr Lake reservoir flowing for us...and the City of Winston-Salem. Ken's comments came during our June membership meeting.

Dylan joined the college's SkillsUSA team's National competition recently in Louisville, Kentucky. The HBA has also made a contribution to that program headed up by Team Advisor Hardin Kennedy. Those teams have traditionally performed very well... earning top honors over the years. GOOD LUCK to ALL!!! 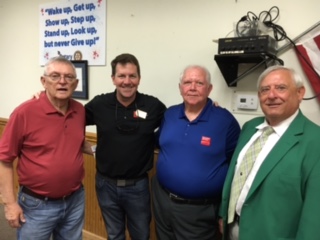 On top of that, the HBA was pleased to have State Home Builders president, Brian Pace, join us...along with Region 8 vice president, Gary Witherspoon, and State membership chair Jerry Cowan, of Builder's Mutual Insurance Corporation. Brian's emphasis during his term as NCHBA president is to raise awareness of the many advantages of being an HBA member...advocating he wants to "Know, Grow, and Go".

Result of Our Recent Raffle

It was the thought of not winning anything...that led to 5 raffle ticket holders electing to split an $8,000.00 grand prize at this year's Raffle dinner hosted by the Wilkes-Yadkin Home Builders Association. After all, $1,600.00 is better than nothing.

Sherry Deal picked up $100 for the dubious distinction of being the first number pulled out of the tumbling drum. B & R Service got $200, Rick and Sandy Whitley pocketed $300, and $400 to Andy Davis as payouts at selected intervals along the way.

Rick Whitley and Bobby Nichols sold more than half the total tickets allotted for this event. Thanks too...for keeping the books and other helpful assistance to Ann Tuttle, Sandra Huffman, Shanna Bell, Vickie Huffman, to all ticket sellers and buyers, A & J Rental, the set-up and take-down crew, and to Auctioneer Randall Woodruff...for another delightful, fun evening.

Great State Auction Company has at least two upcoming events of interest to our members and the public.

Our event helps the HBA in its support of such programs as Habitat for Humanity, the ReStore, the Joe Faw Scholarship Fund, SkillsUSA, among others.